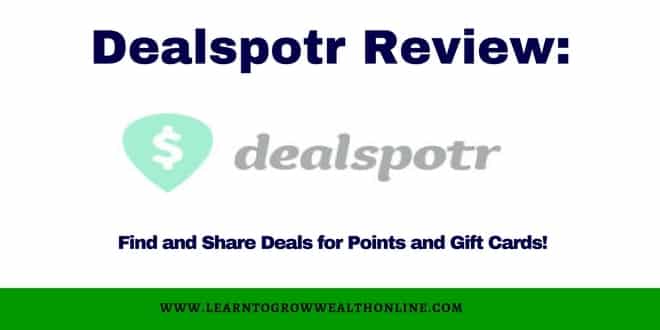 In this Dealspotr Review we’ll discuss this new online coupon based program and show you how you can make extra money using Dealspotr.com

Dealspotr is an interesting new online platform that allows members to share the deals that they find while browsing the internet.

It’s a deal and coupon website with elements of social media mixed in. For instance, members can have followers and share deals directly to their followers, and so on.

There are a lot of these websites out there and some are fun to use and you can make money from them.

Should you use it, let’s find out.

Members have the opportunity to promote the company and earn points which can be spent on gift cards and other rewards.

The affiliate program is also quite interesting because you earn 10% of the points that your affiliates earn.

So as long as your affiliates continue to use the website, you’ll continue to earn points from them.

There are two ways to earn points with Dealspotr..

It’s relatively simple and it can also be a fun way to make some extra cash!

Keep in mind that the website pays members via Amazon Gift Cards and not real cash.

So if you use Amazon on a regular basis, this might be one way to get some discounts on Amazon purchases.

Or you can send the card to friends.

Let’s take a closer look at the platform…

The easiest way to earn deals with Dealspotr is by uploading deals that you find around the internet.

The process is rather simple but you will need to fill in the relevant details a long with instructions on how to redeem the deal.

Once the deal has been published you’ll earn 25 points!

It’s also important for readers to know that you can only post a maximum of 4 deals a day!

But don’t worry, there are other ways to earn points.

One other way to earn points is by Spotting Deals.

When a deal is publish on DealSpotr.com, there are several features available.

Spotting the deal is a little fun feature that will reward you with points if you can predict if the sale will go hot.

When a deal that you Spot ends up in the Hot section you will be rewarded with points.

If other members Spot your deal then you’ll receive 10 points!

I actually uploaded one deal for a video game that I found online, and I was a little disappointed that I only earned 25 points for sharing the deal.

But I checked back later and over 10 people Spotted the deal, so that’s 100 more points for me.

I thought that was interesting!

So there’s definitely potential to earn points fast by sharing deals and waiting for people to Spot them.

You can also validate other people’s deals for points as well.

What this means is that you have to test out the deal to see if it actually works and then upload a screenshot as verification.

It’s important to know that you don’t need to actually buy the product advertised but rather upload a screenshot of the checkout page with the coupon activated.

If several people verify the deal and rate it as valid, then your rating will increase.

I noticed that not many people seem to be validating the deals because every deal I clicked on there was a warning that said, “The likelihood of this deal working is Low”.

What I Liked About Dealspotr:

Here’s what I liked about this coupon platform.

First of all, it’s very easy to use and the point activity can bee seen in real-time.

It seems like they’ll accept any deal or coupon as long as it’s valid so you don’t need to worry about sharing deals in taboo niches.

The community seems to edit the deals, so it’s important to always upload accurate information.

Make sure the deal is valid for the dates you have selected and all other information is correct.

I liked how Dealspotr makes it easy for you to benefit from little deals that you find online.

For instance, if you recently found a cool deal online and bought the product, now all you need to do is share the deal on Dealspotr and earn some points.

Basically, there’s not much that you have to do besides find deals and share them.

I also thought the affiliate program is another nice way to earn points.

It’s all free by the way so it won’t be difficult to find people who will be willing to use the platform.

Overall, Dealspotr is an interesting and fun coupon platform, but there are some downsides.

For starters, it seems like most of the deals are for stores in The United States.

Of course, this is not a problem for people who live in the country but for those of you who live in other countries it’ll be difficult to redeem these deals.

When I made a deal and it went live, they sent me an email every time someone Spotted my deal, and that ended up being around 10 emails.

I had a hard time finding the email notification settings to turn off these emails, eventually I found it through the emails they sent me.

So I think the email notification settings should be a little easier to find.

To conclude, Dealspotr is a fun platform that you can play around with to earn some points and gift cards.

Of course, it’s not one of those products that you can use to make thousands of dollars and it won’t teach you how to make money online either.

It’s not a scam, and it’s totally free, and it links you to good deals!

Overall, it’s a good platform, and with a few little changes it could be a really decent platform.

I also think if they start paying real cash instead of gift cards they could really see some explosive growth.

I currently have a request in on this, so I’ll update as needed.

If you’re looking to make money online, this probably isn’t the best fit for your needs.

Instead, take a look at my favorite training program!