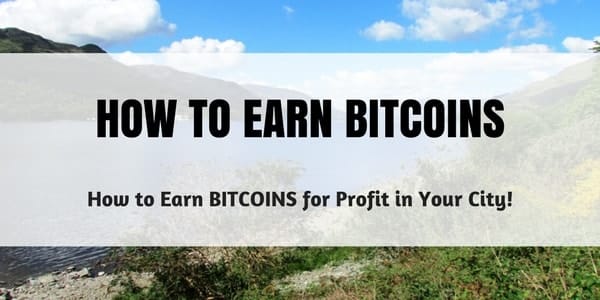 Learn how to earn Bitcoins for profits the smart way!

You only need the right info and a few good resources to get started.

You can buy and sell Bitcoins for a profit?

There are many people around the world who are making a lot of money dealing Bitcoins.

If you’re interested in buying and selling Bitcoins for a profit, then you came to the right place.

In this article we will talk about how to earn Bitcoins and how to sell them for a profit.

Is Dealing with Bitcoins Risky?

There is a lot of stigma attached to Bitcoins because it’s an encrypted currency and untraceable, an ideal currency for illegal activities.

Authorities have busted several websites that offer illegal services or products in exchange for Bitcoins.

Thus, the currency has a bad-rep!

But that doesn’t mean it’s illegal to deal Bitcoins, the currency on it’s own is perfectly legal, it only depends on how you use it.

Not to mention the incredible growth spurts it sees every month!

There have also been some cases where people attempted to sell Bitcoins only to have the buyer disappear with the Bitcoins and vice versa.

This is where a third-party Bitcoin trading service comes into the picture.

If you try to create deals on your own without any third-party protection there’s always a chance that you will encounter some problems.

So, dealing with Bitcoins is risky if you do not use a third-party service, otherwise, it’s perfectly safe.

Still, one should take precautions when dealing with these currencies, especially if the value is relatively high, it’s recommended to meet in a public area.

How to Earn Bitcoins?

There are several ways to collect Bitcoins, we will summarize some of the most common techniques in this section.

Bitcoin Mining is a rather complicated process and difficult to explain but I’ll do my best to summarize the process for you.

Bitcoin Mining is the process of solving mathematical problems in exchange for small amounts of the currency.

Miner’s use special software (and hardware) to solve these problems on the Bitcoin network.

But here’s the catch, every time a problem is solved, the next problem is more complicated, this makes it difficult for people to abuse the system.

And you will need to upgrade from time to time as more miners join the network and make it more difficult to mine.

Mining Bitcoins consumes A LOT of power and you need a powerful GPU (Graphics Card) to mine any worthwhile amount.

So if you’re interested in Bitcoin mining remember the electricity bill will be quite high.

If you can make a profit – awesome!

But electricity can be quite expensive in some countries, and the amount you earn from mining won’t cover it.

It is possible to purchase hardware specifically designed for solving these transactions but don’t expect to fire up one of these devices and collect hundreds of Bitcoins on a daily basis. It takes time.

So that’s one way to collect Bitcoins.

This is the easiest way to earn Bitcoins.

If you have a service or product to offer the world, all you have to do is enable Bitcoins as a form of payment.

More and more websites and companies are accepting Bitcoins so this is not as unusual as you might think.

There are plenty of websites that will pay members to complete tasks in exchange for the coins.

The amount is usually very small but it can add up overtime, and the currency’s value can increase, therefore, it’s similar to an investment.

There are other, minor, ways to earn Bitcoins, but the three methods mentioned above are the most profitable.

Let’s assume that you have some Bitcoins and you want to sell them, what can you do?

Well, there’s actually a large marketplace for Bitcoins, thousands of trades are done each day!

The trick (as we mentioned at the beginning of this article) is to find a marketplace that is secure and offers buyer (and seller) protection.

There’s one website that I found that makes it incredibly easy to find buyers (and sellers) for Bitcoins right in your area.

It’s free to join and you can browse through the offers, find a buyer, find their contact information, and figure out a way to meet up in person.

Once you meet up in person and the buyer hands you cash (or your desired payment method) you can confirm the purchase on your profile and the website will deposit your Bitcoins into the other person’s account.

It’s similar to Escrow, but for Bitcoins.

This service is relatively new but I couldn’t find any negative reviews about it online.

It’s a company called Local Bitcoins and it’s one of the best marketplaces for Bitcoins online.

The reason people love it is because the company provides an unbeatable level of security for buyers and sellers alike.

It’s also extremely convenient, sellers can choose their desired method of payment (cash, Western Union, or Paypal) and meet up with the buyer in person.

Most people prefer to deal with cash, therefore meeting the buyer is necessary.

These deals are often done at coffee shops, once the money has been collected, all the seller has to do is text Local Bitcoins and confirm the purchase, then the currency is transferred to the buyer’s account, this takes a few seconds.

There are a few reasons that Local Bitcoins is superior to other Bitcoin marketplaces.

Those are just some of the benefits…

Conclusion on How to Earn Bitcoins:

If you are looking for another way to bring in some cash, dealing Bitcoins is an interesting idea.

Much like other currencies or commodities, all you have to do is find cheap deals and then sell higher for a profit.

I highly recommend Local Bitcoins because they make it remarkably easy to create deals and find buyers.

If you have some Bitcoins, Local Bitcoins is the perfect marketplace to find a buyer for a fair price.

You could even acquire cash, which is rare for Bitcoin deals.

Want to learn how to build a legitimate business online?

You’re Smart: Check Out My No. 1 Recommended Program >>

Just remember to be cautious when dealing with high amounts and always suggest meeting in a public area. It can be dangerous otherwise.

Well, I hope this post has better helped you learn how to earn bitcoins  😉

Thanks for reading, leave a comment below with your opinions, I would love to hear what you think about Bitcoins!