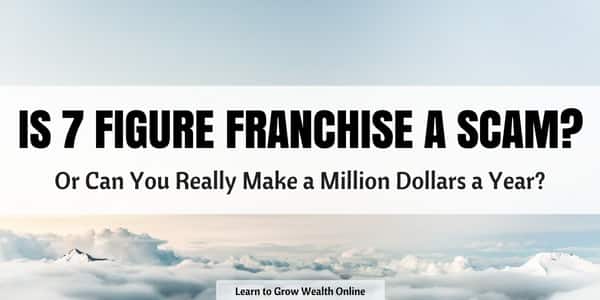 Is 7 Figure Franchise is a scam? Are there things you should know about the program before you take the plunge?

Find out in this 7 Figure Franchise review.

Who doesn’t want a turnkey solution that can make you money right away, even if you have no list, no website, and no experience?

That’s the bold promise that the official 7 Figure Franchise website (sales page) makes, but does it live up to it? Let’s find out.

Best For: Nobody in my opinion.

Summary: 7 Figure Franchise is a very average internet marketing product with an expensive price tag. You buy the re-sell rights to promote the same system you just bought.

Why Not? You’re buying into an expensive system that lacks value and basically promotes the owner’s business instead of yours.

What is 7 Figure Franchise?

7 Figure Franchise is a high-ticket training program that will teach you about traffic generation.

It was created by Michael Cheney, who has also developed quite a few other products that are high in popularity.

In fact, we reviewed three of his previous products:

Just by reading the name of those products you probably have an idea of what type of business model Cheney follows.

Is 7 Figure Franchise the same?

Along with the training in 7 Figure Franchise, you’ll also gain resell rights to all of his products, which is part of the “turnkey solution” he touts (he’ll teach you how to sell his stuff).

7 Figure Franchise is a high-ticket product.

It’s ideal for a person that has a couple thousand lying around, and who doesn’t have as much time as they do spare change.

7 Figure Franchise is also great for someone who doesn’t want to put in the legwork when it comes to finding a niche, sourcing a product, and so on.

When you buy the product they also gives you re-seller rights.

Essentially you have to buy the product you want to promote.

Basically the product and the sales funnel become “Yours” so you can start promoting it.

That’s pretty much the short version.

For that price, you’re basically purchasing resell rights to Michael’s products and then some training that will help you promote said products.

Like a franchise (hence the name), it could be taken away from you at any time, so you aren’t building your own business–you’re helping to build Michael’s business.

With that said, you can make money with it.

Most people praise this course because they want to earn the fat affiliate commissions.

Here’s a screenshot from the affiliate sales page: 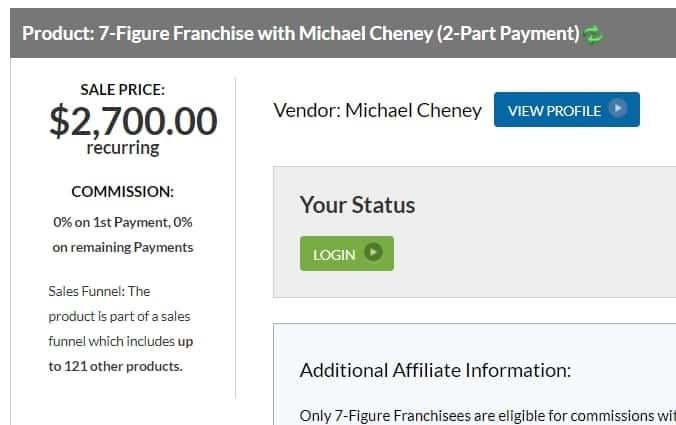 So most 7 Figure Franchise reviews are positive, because the writers want to earn that affiliate commission.

But is 7 Figure Franchise worth thousands of dollars?

You aren’t building your own business, you’re helping to build Michael’s business.

If Michael’s business ever goes down, your business will go down too because it’s just a franchise of his business.

You could become an affiliate of the 7 Figure Franchise itself for free and begin making money by pushing that, as most supporters of it on the internet already have.

You have access to the same library of resell products and the same information that every other student has, and you’ll compete with other students to make sales.

Besides that, we also didn’t like the overly expensive price.

And it’s not one product either, the sales page has over 121 products in the same funnel.

Actually, the other products in the funnel are the same ones we reviewed before (mentioned above).

So how it works is he creates a sales funnel that includes links to all his other products!

Is 7 Figure Franchise a Scam?

Can you make money with the 7 Figure Franchise? It is a legitimate business opportunity?

But the fact is you’re never going to make as much money as Michael is.

His business model has proven quite successful, for himself.

Because it’s basically based on creating and launching a new product, under a different name.

Just imagine having your own line of products.

And then selling access to resell those products to other people, charging them to teach them how to sell your products for you.

Nevertheless, I can’t say 7 Figure Franchise is a scam because you do get something for the cash, but it’s not something we recommend.

The reason we don’t recommend it is there are much better ways to make money online, where you are in full control.

The training material is quite basic, and you can find the same information with a few quick searches on Google.

For example, for traffic, he recommends writing guest posts on other blogs and sol0-ads – that’s not a unique traffic-generation strategy!

Is There an Alternative?

And no it’s not a different thousand dollar product.

It’s a simple strategy; learn to build your own online business.

The biggest downside to this program isn’t the high up-front cost or the clever twist.

It’s the fact that this is only a franchise of Michael’s company.

You’re not putting in the time in to build your own successful business, you’re helping to grow Michael’s business.

If you want an online business venture so that you can “fire your boss” or what not, you’re really just getting into a similar hierarchy with this system (albeit with more freedom to do what you want).

So to answer your question, “Is 7 Figure Franchise a Scam?”:

The answer is no, it’s not.

But there are better paths you can take, that don’t involve spending thousands of dollars.

Thanks for taking the time to read this 7 Figure Franchise review.

After Years of Testing Out Products, Here’s One I Recommend: