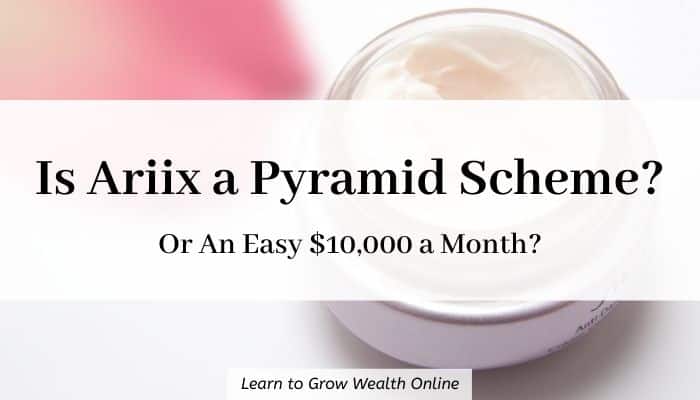 So you heard of a network marketing company called Ariix and you're wondering "Is Ariix a pyramid scheme?". With offices in more than 9 countries, Ariix is one of the largest multi-level marketing companies to date. On their website, they refer to their company as "The Opportunity Company". But does it actually work?

Quick Navigation
Ariix Review:
Pros:
Cons:
What is Ariix?
Is Ariix a Pyramid Scheme?
Unleash Your Finances & Unlock Your Full Potential:
Getting Started with Ariix:
Does Ariix Have an Income Disclosure Statement?
The Bottom Line:

Looking for a NON-MLM Income Opportunity? Try This Instead:

According to their company's about page, Ariix is..."A global company that provides you the opportunity to broaden your horizons and expand your circle of influence." If you're scratching your head and trying to figure out what that means, then we're on the same page. I'll try to translate for you.

Ariix is a multi-level marketing company that was founded in 2011 and they sell a wide range of products in multiple categories, mostly health & wellness. Their income opportunity attracts new members by promising the best commissions in the industry and unlimited income potential. You can make money by either selling the products for commissions or building a team.

As of today, Ariix sells 7 brands on their website, within the following categories:

It's very similar to Modere, another MLM company that offers similar products.

As is usual for the MLM industry, Ariix's products are quite expensive, and the real way to earn is by building a team through their compensation plan, called ACTIV8. Since the ACTIV8 model is based on growing a team for extra commissions and bonuses, it's easy to assume Ariix is a pyramid scheme.

Is Ariix a Pyramid Scheme?

Ariix closely resembles a pyramid scheme, but technically it's not one. It operates within a very fine line between a pyramid scheme and a multi-level marketing business.

Ariix is not a pyramid scheme because they offer multiple products and services to sell and earn commissions on, so income is not entirely based on recruitment. Of course, since the products are overpriced, most people won't want to buy them, so building a team is the best way to earn.

But with Ariix you can earn in other ways too. Having said that, it's very rare to achieve success with a multi-level marketing company. One study by the FTC concluded that 99% of people fail to earn a profit with a MLM opportunity. You have better chances gambling!

"In other words, the vast majority of commissions paid by MLM companies go to a tiny percentage of TOPPs (top-of-the-pyramid promoters) at the expense of a revolving door of recruits, 99% of whom lose money."

As is usual with most network marketing companies, their compensation plans are unnecessarily confusing and require you to learn pages of new terms. With Ariix, they use a patented compensation model called, "The Ariix Multiline: Unlimited Depth, Width, and Income". 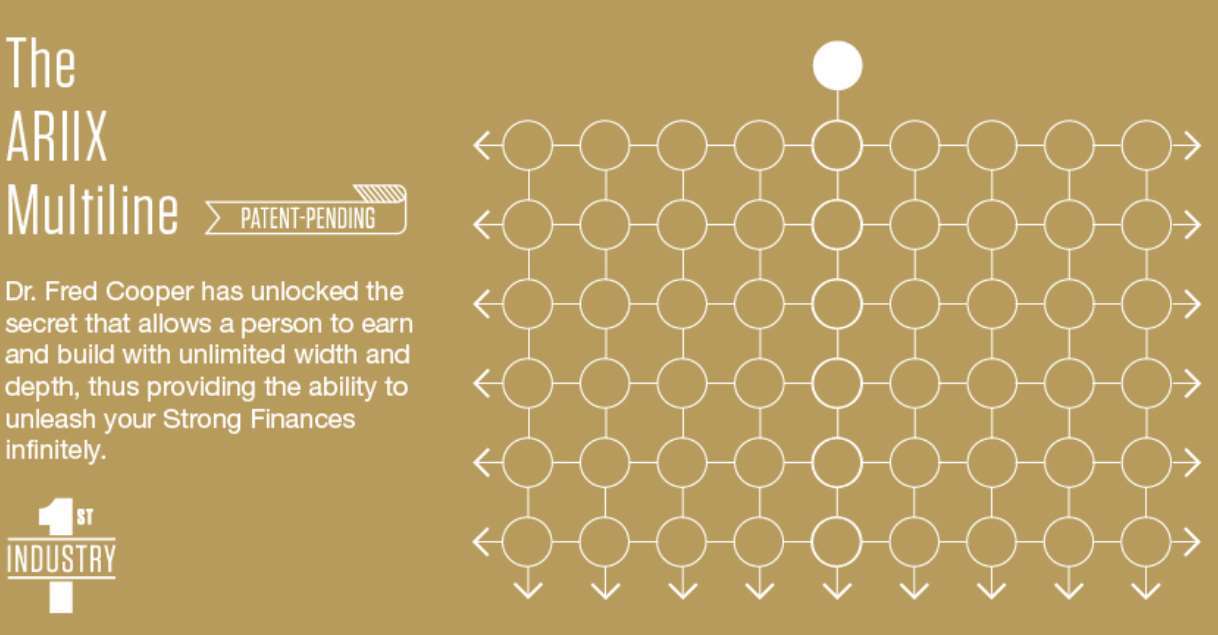 To be fair, the compensation model is a little different than the ones we are used to but the core idea remains the same; build a team, and get them to build a team. Their team-building model is based on groups of four, find four people to join under you, and then four people under them, and so on.

Getting Started with Ariix:

To join Ariix's ACTIV8 compensation plan you need to buy:

Although not required, to improve bonuses, Ariix recommends buying the IIX membership which costs an additional $150 one time fee. The IIX membership unlocks more perks and bonuses, they claim it can double your income. 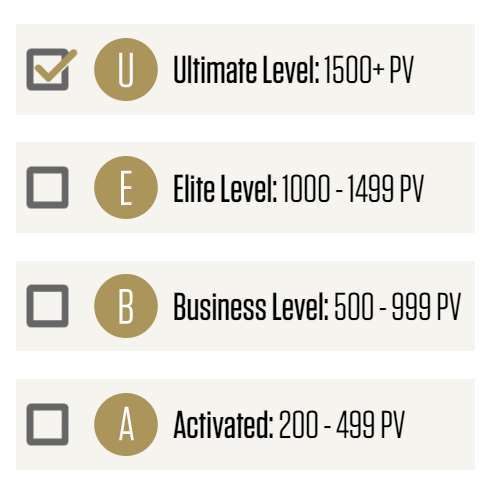 We won't be getting into too much detail about the ACTIV8 compensation plan here because their official documentation is complicated enough (it's 18-pages!). Here's a list of possible bonuses and commission rates:

Bear in mind, most of these bonuses and perks are only available once you progress up the ladders and titles. For the average member, only a handful are unlocked. Titles are earned based on your total lifetime earnings and 1-week Pay Line volume.

Ignoring all these terms and bonuses, the basic idea is to recruit new members and make sales. Most of the bonuses are available only when you start building a team, and that's what you're pressured to do. Ariix's promotion videos make it seem easy to recruit new members, but it's actually very difficult. And the people that do join are not likely to stick around. Making money with Ariix's compensation plan is not nearly as easy as they make it seem.

Does Ariix Have an Income Disclosure Statement?

Ariix does have an income disclosure statement (link here), although it hasn't been updated since 2016 (and this version is still shown on their website) it reveals some interesting data.

At first glance, it looks like the representatives are bringing in a decent amount of cash. But the way the income disclosure is structured is actually a bit misleading for a couple of reasons. For one, the "Full-time Representatives" are the top of the chart. The problem is you don't know what a full-time representative is, until later on, in the fineprint. Under that section, there's the "Part-Time Representatives" which represents the number of actual members.

What is a full-time representative? It's someone who reached the title of Officer or higher during any period. The problem is the "Officer" level is actually quite high on the list, and it requires a 1-week total Pay Line volume of 6,667. To put that into perspective, only 1.93% of all active members in that rank.

Moving down to Part Time members, we see that 51.5% of members are in the Team Lead rank. The average weekly earnings for that rank are $70 and it takes about 2.5 months, on average, for people to reach that. Annually, it comes to $3,658. Just above that title, we have the next most populated rank with 25.4% of members, earning $167 weekly average.

To be fair, the income disclosure statement is not as shocking as others (Stream Energy's shows the average annual income for 58% of members is $0.04), but Ariix's does reveal that most people aren't making much money at all.

On another note, the numbers listed in the chart are not profit. I imagine, if expenses are considered, most of these numbers would be in the negative. It would also be nice if they updated the chart, it's more than four years old. So as we can see, the income potential from this opportunity is not that great, especially considering you have to pay to join.

Ariix is another networking marketing company that I do not recommend. It's expensive to join, the products are expensive too, the compensation plan is complicated, recruiting new team members (and keeping them around) is very hard, and you have to constantly buy products to hold your rank. It's just not a good business model. You can read more about my arguments here. Overall, it's not something that recommend.

As an alternative, you can consider learning how to build your own online business through the affiliate marketing model. While you do need a small investment, it's not nearly as much as any Starter-Packs, and most affiliate programs don't charge you to promote them. Affiliate marketing is one the least expensive ways to start making money online. You can learn more about my recommended online business platform below!

Get Started with 7-Days for Free!

Thanks for taking the time to read this Ariix review. I hope you found the answer to, "Is Ariix a Pyramid Scheme?". Leave a comment below if you have any questions. Good luck.