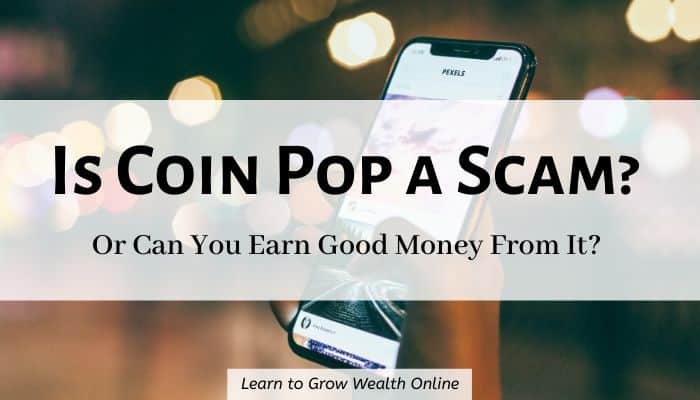 You saw an app called Coin Pop that promises PayPal rewards for playing mobile-games, and you're wondering if Coin Pop is a scam. In this Coin Pop review you'll discover what it is, how it works, and whether or not it's a good app to generate some money online.

Quick Navigation
Coin Pop Review Facts:
What is Coin Pop?
How Much Money Can You Earn?
How to Withdraw Money with Coin Pop:
Coin Pop Pros:
The Cons with:
Is Coin Pop a Scam?
Do I Recommend Coin Pop?

As far as reward-apps go, Coin Pop is okay. But it's only available in a select few countries, and you won't be able to earn much at all. On top of that, their customer support isn't the best. Generally, it's not a sustainable income model.

If you're looking for a Coin Pop alternative, I recommend Wealthy Affiliate. It's an online training center that will teach you how to build a profitable website from scratch. It's free to try out too and has all the tools, training and support you need.

Tired of Apps that Pay Cents? Here's an Alternative:

What is Coin Pop?

Coin Pop is an app on Google Play that rewards users with coins for completing various offers or playing mobile-games. The way it works is much like most offer-walls, except mostly for phones. There are lots of games you can play, such as strategy, action, puzzle, adventure, and others. Not to mention the surveys and other offers.

What you need to know about Coin Pop is that it's based in Europe, so the currency they use is British Pound. You will need to factor in the conversion rate when you cash out through PayPal. Even though they're a European company, they do offer gift cards for most American retailer stores.

Another point to keep in mind is Coin Pop is developed by the same company behind quite a few similar apps, such as App Flame and Bitplay, so it's not exactly a unique idea.

There are lots of similar apps out there, such as:

How Much Money Can You Earn with Coin Pop?

Like with most apps, using them won't make you rich. But there's a difference between having the option to earn a few dollars or cents. Coin Pop doesn't pay that much. I would say the potential income is in the mid-range area, a few dollars here and there, mostly.

The way Coin Pop rewards users is not only by downloading and installing apps, but also for time spent using those apps. Time spent is tracked in 2 minute intervals, so if you open the target app for 2 minutes, that counts towards your reward.

What is important is the amount of time you can invest into the app. If you spend a lot of time playing their games, then you can earn a dollar or so a day, otherwise you won't earn much. The good news is the minimum payout is very low ($0.50) so you can get a bit of money in PayPal.

How to Withdraw Money with Coin Pop?

Coin Pop offers a number of ways to withdraw funds, here's a list of their most common withdrawal methods:

There's also the option to earn vouchers and coupons. What you might notice is Coin Pop's only cash-payment option is PayPal, they don't do direct bank transfers. Most people are happy with the PayPal option.

It's nice that Coin Pop's pay out limit is only 50 cents. It doesn't take very long to earn that amount. If you have a lot of free time, then you can earn that within a day.

I also liked how Coin Pop usually processes withdrawal requests in a day or two. They make it very easy to get ahold of your earnings which is great.

Another positive point is Coin Pop offers a good start-up bonus of 4,444 coins. It makes it much easier to reach the first minimum withdrawal amount.

Only Available in a Few Countries

Many users are left disappointed when they head over to Google Play only to find out the app is not available in their country. There's no clear list of supported countries, but it looks like they're limited to countries where English is the official language, such as U.S, U.K, Canada, and others.

Has Quite a Few Bugs

I noticed the app has a number of bugs and issues. For example, play time wasn't being recorded or shown correctly, and the cash-out pages were crashing and payments not being processed. There are also lots of  cases of people being flagged for suspicious activity for no good reason.

While they do have a support team, most emails are left unanswered. I found lots of comments and reviews from people who never received support from Coin Pop. It's why a lot of people assume Coin Pop is a scam.

Note the thumbs-up on the right side? That represents the number of people who agreed with the review. If so many people agree with that complaint, maybe that's something to consider.

I noticed the Android app requests permission for your phone contacts and other details. It doesn't seem necessary, and it's a little questionable. Personally, I'm not a fan of apps that request phone permission beyond what is required.

Is Coin Pop a Scam?

They do pay members, and it - generally - works as advertised. Of course, you won't get rich, but you can earn a few cents here and there. Their customer support needs some work too.

Overall, it's something you can try it when you're bored, but keep your expectations low.

Do I Recommend Coin Pop?

No. I do not recommend Coin Pop as a way to earn consistent online income. These kind of apps can be okay to earn a few cents, but after awhile, earning becomes harder and harder. Eventually, the app's income completely dries up, and you're left with nothing to show for it.

So what is it I recommend? I recommend learning how to build a legitimate online business using the affiliate marketing model. It might sound complicated, and it does require effort,  but it's the best option to earn money online. I earn a steady four-figures from one website alone. There's no limit to what you can earn.

Stop Earning Cents with Apps! Try THIS Instead...

Thanks for taking the time to read this Coin Pop review. You can feel free to try it out, but I wouldn't recommend it for long term use. Hopefully now you know the answer to "Is Coin Pop a Scam".