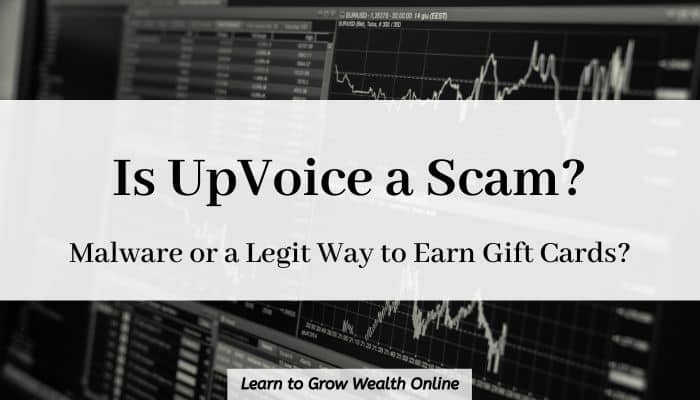 Is Upvoice a scam or a legitimate platform? I was recently asked this question, so I decided to do some digging and what I found might interest you. In this Upvoice review I'll be breaking down how the platform works, what tasks you can expect, the rewards, and other details. I'll present you with all the information you need and you can decide if Upvoice is right for you.

What About Affiliate Marketing? Try My #1 Recommendation:

Do start, UpVoice is not your typical survey-panel platform. It's a platform designed by BrandTotal, a market research firm. UpVoice is a Windows 10 app (there's also an extension for Edge) that works passively while you browse social media, or as they like to call them, "social feeds". The extension tracks the ads from social media websites, such as Facebook, YouTube, Instagram, and whatnot.

The data is used for market research and advertisement campaign insights, and you're rewarded for your contribution. Essentially, it's like personally selling your data. Naturally, you might have some concerns with the idea of selling your personal browsing data, especially on social media, and we'll cover that a little later.

Is UpVoice a Scam?

No. As far as passive income apps go, UpVoice is not a scam because they do pay members and you can redeem the rewards that the promise. While the data-collection techniques are controversial, you do get rewarded fairly, and you don't need to do any actual work, it's all passive.

As I mentioned earlier, making money with UpVoice is very straightforward and doesn't require any effort on your part. I'll cover the most important points below.

The entire process can be summarized in a few steps:

What Type of Gift Cards Can You Redeem with UpVoice?

You can redeem a wide variety of gift cards at UpVoice. The most common ones are Amazon, Pre-Paid Virtual Visas, eBay, Best Buy, iTunes, and many others. It's an easy way to earn gift cards!

The minimum to cash out with UpVoice is $10 which you can use to redeem a gift card of the same value. The maximum gift card value is $100.

How Long Does it Take to Earn a Gift Card with UpVoice?

It depends on how active you are on social media and how many ads the extension can scan. In most cases, you'll earn 10 tokens a day. Combined with the bonus tokens you earn for creating an account, it usually takes 2-4 weeks to earn the minimum $10 gift card (worth 600 tokens) with UpVoice.

Does UpVoice Pay with PayPal?

Currently the only way to withdraw funds from UpVoice is via gift cards. UpVoice used to pay with PayPal but no longer supports the payment option. However they do allow you to redeem virtual Visa debit cards.

In my opinion, the best feature of UpVoice is you don't need to do any actual work, it works in the background and rewards you for active time. Granted, the rewards aren't great. Still, it's an easy way to earn gift cards. It's very simple to install too, and it doesn't seem to to slow down my computer.

If UpVoice isn't your cup of tea, here are some similar apps:

UpVoice has been in the hot-seat a number of times. As it turns out, UpVoice used to be on the Google Web Store but is was removed because Google classified it as malware. Even Facebook blocked them, which made it impossible for people to login because you had to link your Facebook account to sign-in.

Speaking of Facebook, they sued BrandTotal (the firm behind UpVoice) claiming the extension scraped far too much data without Facebook's permission. We're talking about data like names, gender, relationship status, location, ad preferences, and other data points.

Whether or not UpVoice actually is malware is unclear. But the fact is they do collect lots of data. Currently, the only way to use UpVoice is through the Windows 10 app or the browser extension for Edge, it's not available on Chrome. Since Facebook dropped the extension, now you can only sign-in with either a Microsoft or Google account.

I don't think UpVoice is a scam but the data collection and scrapping accusations are a little fishy. If you're worried about data collection, UpVoice probably isn't the right platform for you.

Instead of using your main social media accounts, what you can do is connect an alternative one. I personally wouldn't connect my personal accounts to UpVoice. The good news is it works with lots of social media websites, including Linkedin, Instagram, Twitter, and many others.

What You Can Do Instead:

So you want to make money online but you're not sure where to start. While these apps and platforms can offer some quick cash here and there, it's very unreliable.

What I recommend is learning how to build your own business, a website that brings in money non-stop. Granted, that's easier said than done. But there's a really cool training center that can show you how to do all that, and more, it's called Wealthy Affiliate.

Thanks for taking the time to read this UpVoice review. Hopefully now you know that Upvoice is not a scam! 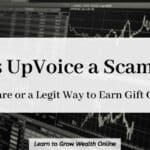