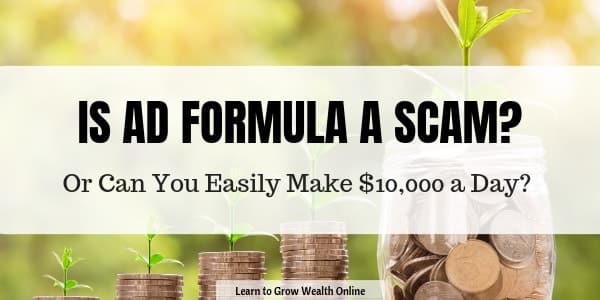 Wondering what is Ad Formula? Thinking about buying a copy? Can you really earn $3,000 a day with their system? I'll this Ad Formula review, I'll do my best to answer those questions.

When you're done reading this review you'll learn about one product that you should avoid at all costs, and another one that's actually worth your time. Without further delay, let's dive in.

Pros: Can be used as an example of scams to avoid.

The bottom line is Ad Formula is one of those cookie-cutter clone websites that promise way too much and deliver nothing of value. It's basically a sales funnel. There are also many other websites out there using the exact same template and website content. Skip to the cons section to see what I mean.

Overall, I do not recommend Ad Formula. It's a downright scam that leads you to random traffic exchange websites. Do not even think about buying into their program. I explain why in this Ad Formula review.

What is Ad Formula?

After hearing how much money Ad Formula is supposed to make you (Hint: $3000 a day), I'm sure you probably already guessed this is not a legitimate product.

Ad Formula, by a marketer called Jack Heaton, is a supposed to be a  system that can generate money for you completely on auto-pilot, through banner ads posted on various traffic-exchange platforms. That's what they claim, although the truth is a little different.

Nevertheless, on the surface what you'll see is a sales video, and a sign-up form that requires your name, email address, password (why?), and cell phone number.

Oddly enough, the password requires a mix of 8 characters, one uppercase, one lowercase, and one number. Even making a fake password is hard.

I actually tried to enter some random information, but I got an error that says, "Currently, there are no available advertisers for your country." and I tried Canada, United States, and UK.

The Sales Video is Too Much:

It took me a grand total of two seconds to figure out this product is a scam, but I did think the pitches were quite funny.

If you watch the sales video, the narrator goes on about how you have been exclusively selected to watch this super-exclusive video that's only available in your country and will be deleted after 100 plays.

He also promises that you can easily earn $10,000 a day online, backed up with random stock pictures of  cars and beaches as proof of his income. 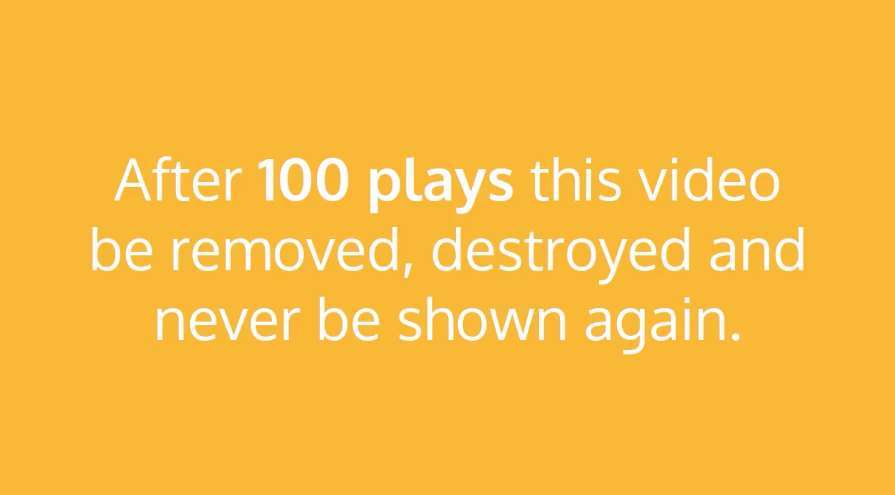 The introduction to the video consists of stitched together clips from news clips that mention working from home. These clips are taken from random stories, but stitched together, and used to promote Ad Formula.

Regardless, the hype is kind of ridiculous. The narrator goes on to say that you'll make so much money that you won't even know what to do with it. Indestructible wealth, he calls it. And as you can imagine, the pitch goes on for more than 20 minutes, and with little mention of what the system is about. Pure fluff.

Eventually, there's some mention about banner ads. But it's more like an explanation of how banner ads work, which isn't really relevant. And then he launches into his sob-story, and more hype, and more of his background, and more about how much money can be made with banner ads.

It's just too much.

Ad Formula is a Scam:

I'll cut to the chase, Ad Formula is a straight up scam. The registration page will redirect you to an affiliate link of some random ad-exchange (their recommended provider changes) and there's really nothing to gain from the platform.

Yeah, traffic exchanges can help send a few clicks to your offers, but traffic from those platforms rarely converts, and they're really not worth it. Long story short, Ad Formula is an obvious scam.

But don't take my word for it, here's the evidence:

Jack Heaton is a Stock Actor

Whenever you come across these kind of products, I urge you to copy one of the images into a reverse image search service. The results will show you where the image is found online, and most of the time, they're stock images.

That guy who claims to be the one to discover a loophole that generates billions of dollars online, he's a stock actor. The real person probably doesn't even know his image is on these kind of websites.

Getting back on topic, the creator of Ad Formula, Jack Heaton, happens to be such an actor. Take a look at this screenshot from the homepage of Ad Formula:

Looks like a standard portrait image you might find on most business websites, right? Now look at what happens when you copy it into Tin Eye, one of the best reverse image search services.

As you can see, the exact same image can be found in Adobe Stock Images, as well as a few other stock-image databases.

Suddenly the tiny bit of credibility Ad Formula had was lost. Right off the bat, we have a product with a fluff and hype filled sales video, and the so-called creator is a stock actor. Not off to a great start.

Here's what I liked:

1. Is An Example of a Scam to Avoid at All Costs:

One thing I liked about Ad Formula is it's a classic example of an online scam. If you're wondering what a scam looks like, now you know. It's got all the hallmarks of an online scam, and tics all the boxes on the list. If you come across sales pages like this, run in the other direction.

The Cons with Ad Formula:

The hype is unreal, and not at all believable. They say you can earn at least $3,000 and eventually $10,000 a day without doing any work. It's not even close to possible. The types of businesses that make that kind of money require a lot of work on your part, and take a long time to build.

This product is similar to two other scams we've reviewed before: 7 Figure Freedom Formula and Home Profit System.

We know the so called creator of Ad Formula is a stock actor, but it looks like the testimonials are pulled straight from Fiverr as well. If you didn't know, on Fiverr you can hire people to do all kinds of things, one of which is create a video testimonial for your website.

Click to read about all the paid types of Gigs you can find on Fiverr.

In my case, it didn't even work. It kept saying there are no deals in my area, too bad. But other Ad Formula reviews mention the recommend traffic exchange varies, sometimes it's Banner Bit, other times it's Clicks Dealer, and so on. It looks like the funnel is updated to point to any random ad exchange website.

These type of websites are essentially templates, and new ones pop up with slight variations to the name and sales videos. For example, one clone I found for this course is called The Ad Code, and it's almost identical to Ad Formula.

The only difference is the name and the creator, this time it's Rob Goldman who is the CEO and Founder. But on this other website, Ad Code, the hype is even worse, claiming that you can easily make $5,000 a day.

After a bit more research, here's the full list of clone websites:

I never like it when a squeeze page requests your phone number and a password. You just know that this data will be sold as leads to random companies, there's no telling what list your information will end up on.

On the subject of passwords, it makes sense to request a password if your creating an account on a platform. But it's not even clear why they're asking for a password. The button only says Get Started now. And they are very strict about the passwords you can use. For what, exactly?

When it comes to enter passwords on suspicious websites, it goes without saying that you should use random passwords, and never ones that you use for personal platforms or your email accounts.

How Do I Make Money Online?

Most people still think making money online is a myth, a pip-dream, and not possible. But I can tell you it is possible, and many people are doing it. There's no reason you can't, either. I won't lie, it does take work and time. And you need to follow a proven system, otherwise you won't see the best results.

Wondering what system you can follow to build an online business? How about the one I joined many years ago to build this website? Hit the button below to check out my top recommended training center!