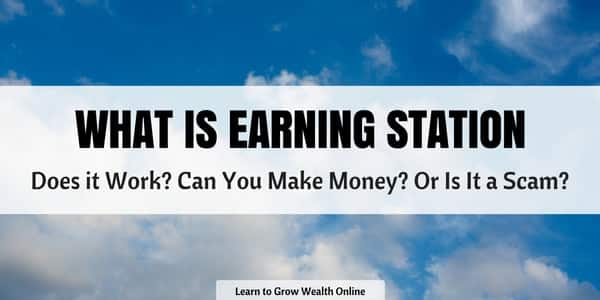 Wondering what is Earning Station? Is it a great place to earn some pocket change online? Do they have a lot of tasks to complete?

There are thousands of survey sites out there, and they all promise the same things: make money from home, make easy money online, etc.

But most of them pay peanuts, no where near enough to live off of.

Does Earning Station really live up to the hype? Does it deliver as promised?

Best For: Those looking to make a little pocket change in their spare time.

Summary: Earning Station is a legit site to get paid for online tasks/surveys. The payment is in the mid-range but that’s not saying much.

Low income earning potential and risk of being spammed for a couple dollars per week isn’t worth it..

What is Earning Station?

Earning Station is a survey portal where you can earn cash for completing a wide range of tasks.

For example, not only can you earn cash completing surveys, but you can also watch videos, find express deals, play games, and invite your friends. 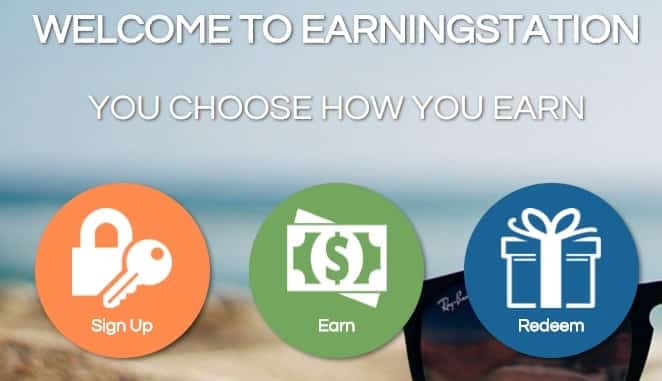 The minimum payout is $10 which is not too high, easy enough to reach. This platform reminded me a bit of Toluna, another survey site that has a min $10 gift card cashout, and $30 for PayPal.

And, as is tradition with survey portals, you can choose to be paid with gift cards or PayPal cash.

If you earn 10 days straight, you can have a chance to win a bonus cash prize, as well as a spin on the Earning Station spin wheel.

This is a way to keep members active.

But lets get to the part you have probably been waiting for:

So I went ahead and made an account at Earning Station.

Once you enter your email address you immediately have to start filling in qualifier questions.

These questions are fairly simple… until they ask for your phone number and physical address.

I’m not comfortable handing out that kind of information to random survey portal websites.

And I’m sure you’re not either!

Nevertheless, I went ahead and filled in the details.

The great thing about Earning Station is there are actually a lot surveys in the survey board. This can often times be an issue with paid survey sites.

I was expecting to see zero surveys, but there were quite a few:

The estimate timer on the left hand side was cool too, though I doubt it’s accurate.

Most of the short surveys pay less than one dollar, but some of the longer ones pay more, around the four dollar mark.

So I went ahead and clicked on a survey.

Interestingly enough, the survey I clicked on asked me to fill in the same questions I just filled in to create an account.

But I went ahead and filled them in once again.

And then I got this message:

It doesn’t tell you who is a perfect match either, so there’s no way to know beforehand.

In other words you get nothing for entering in your personal details multiple times.

And they probably keep your details on file too!

So though there are a lot of surveys on the board, there’s no way to know which ones you can qualify for.

You could spend the whole day filling in the initial questions just to be told over and over that you’re not a match.

To me, that sounds like a waste of time.

Except, these games are all online gambling games that require a cash deposit.

So you have to put down a deposit and start gambling to earn some cash.

But maybe you’ll get lucky, who knows!

Earning Station is partnered with Groupon so when you buy from them you can earn some cash back.

When you buy one of the Groupon deals you can 5.5% cash back, deposited into your Earning Station account.

So you spend money to earn a little bit back.

This activity doesn’t pay much at all but it’s really easy, all you have to do is click on a video and watch the whole clip.

You can earn a few cents doing this, and it doesn’t take much to do.

At least they don’t make you do a qualifier survey to watch videos.

After playing around with Earning Station for awhile, I didn’t find a good reason to stick around.

When compared to other survey sites, the payment is in the mid-range.

That’s assuming you qualify for the surveys, of course.

Still, it’s not a stable way to earn money online, more like a couple of dollars a week.

You’re trading all your personal information for a few dollars here and there.

Is it worth it?

Personally, I get more than enough spam.

Just the fact that every survey you click on demands your physical address was a huge red flag for me.

In my opinion, it’s best to avoid Earning Station because even if you put in a lot of work, the results you’ll get back are extremely mediocre.

You can always check it out for yourself, it is free.

Did I just ruin your idea of earning a living from home?

I hope note. The reality is there’s a much better way to make money online.

Where can you go from here?

Well, I recommend taking the same effort you’d use on taking surveys and online tasks and build a simple niche website.

Once you have a site you can use it to market and sell all kinds of things; services, courses, affiliate products, etc.

Check Out My No. 1 Recommended Product Here >>

Thanks for taking the time to read this Earning Station review.

Hopefully now you know what is Earning Station and whether or not it’s a good way to earn money online.