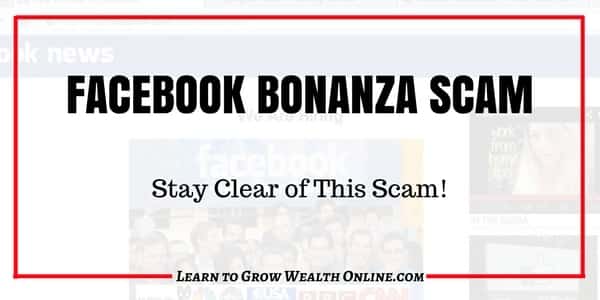 Facebook Bonanza is a new scheme that has been popping up on Facebook, similar to other scams we reviewed in the past.

I’ll tell you right now; Facebook Bonanza is a scam and you should stay clear of it.

Its a lazy attempt to separate people from their cash. Let’s take a closer look.

In other words, they pretend to be an official page on Facebook hiring new workers. 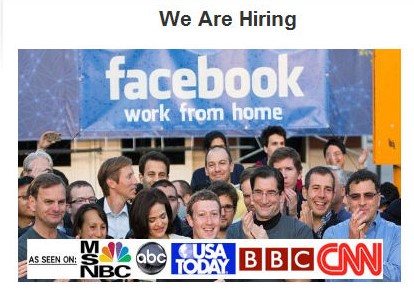 Facebook will hire people for specific roles, if they ever hire in the first place.

Be weary of these type of programs!

On the surface, Facebook Bonanza does look rather official, but on closer inspection, things start to fall apart.

For example, their homepage contains a bunch of logos from well-known sites like CNN and BBC.

There are also a some “interviews” from the above sites to make it look even more official.

The problem is that none of these interviews are from actual representatives or reporters of any news channels.

In fact, anyone can make these kind of videos and slap a CNN logo onto it.

Yes, it is illegal.

Facebook Bonanza is a type of scam that pops up, runs for a bit, and then gets shutdown as people realize its a scam.

The owners don’t mind. They’ll rinse and repeat. Soon a new identical scam will come out.

That’s why its important to know how to spot scams.

So many scams use the same templates.

On the site, the scam will request your contact information, telephone number, and credit card info.

Its common for these type of scams to only request your credit card number – not your bank account number.

Facebook Bonanza will offer to reveal the training material for a few bucks, sounds like a deal, right?

Unfortunately, once you enter your credit card info, after a few days you’ll see some interesting activity on your account.

So it seems like the program charges a small fee first, then later adds on some more fees.

No one really knows.

Besides the additional hidden charges, its common for people who fell for this scam to be bombarded with telemarketers after enter their phone numbers.

And lets not forget about all the spam emails that will flood your inbox – with even more scams!

Is There Even a Product?

Well, there is, but the training is – well – horrible.

Their core product is called a Facebook Cash Kit.

Unsurprisingly, there are tons of up-sells as well.

The training basically teaches you how to promote the same program as an affiliate.

Basically, the idea is to pretend to be someone who works for Facebook and “Hire” people.

Its never a good idea to promote anything that tells you to lie.

I mean, its just so much easier to promote a legitimate program, no need to lie about it.

Fun fact: This scam is so common, the anti-virus company Malware Bytes, thought it was worth writing an article about it on their official website.

If Malware Bytes tells you to avoid it…

When you see the same actors appearing in promotional videos for a bunch of different products, that should raise some eye-brows.

On the sales page of Facebook Bonanza you’ll find a few people gushing about how the program.

You can hire the same people on Fiverr to say the same thing about… well, anything!

So with the right actors, its possible to make any product look like an “official” course.

And that’s why so many people do it.

These scams pop up on a daily basis.

They also die on a daily basis.

If something sounds a little too good and the testimonials sound a bit too far-fetched, its best to do a little research.

On that note, CNN and other news channels won’t do reports on these systems.

Its just a common tactic scammers use; attach their product to another, well-known company to benefit from that company’s reputation.

What Do I Recommend?

But if you do want to make some cash, I recommend forgetting about these “Get Rich Quick” schemes.

If a program says you’ll be able to earn an “X” amount of cash within a few hours, avoid it.

Instead, a more profitable route would be to work on building a business where you can earn your own cash.

Once you have an audience you can promote helpful products as an affiliate.

Yes, it will take some time.

But its worth it.

Remember, it will always be more profitable for you to promote a legitimate and valuable product.

When you promote a scam you have to lie about the benefits, and people can see through it.

Not to mention you probably won’t feel good lying for a living!

To conclude, Facebook Bonanza is a scam, and I suggest you stay clear of it.

In fact, stay clear of all programs advertised on Facebook that promise work at home opportunities.

There are so many similar scams, its best to avoid all of them.

Instead, invest in your own business!

You won’t regret it.

Stick to a plan and dedicate a specific amount of time a day to grow it.

Soon it will develop into a full-time business.

And you won’t have to worry about making cash ever again. 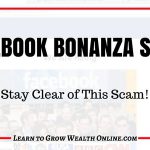