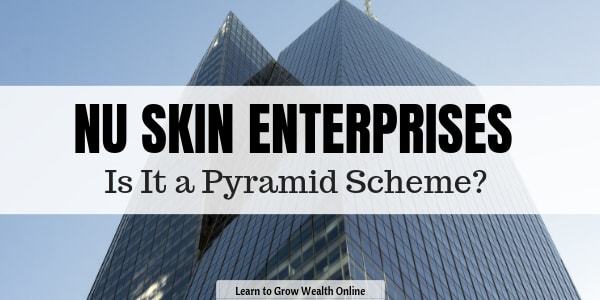 After receiving numerous inquires about this company, we set out to answer the question, "What is Nu Skin Enterprises?".

Founded in 1984 in Utah, United States, Nu Skin is one of the longest-running multi-level marketing companies there is.

While it is an official company with a presence on the stock exchange, many people claim Nu Skin Enterprises is a scam, and a long-running one at that.

Is there truth to those claims?

Or is Nu Skin really a once in a lifetime opportunity?

Summary: More of the same. Nu Skin is a MLM company in the health and personal care niche. Their rewards system is unnecessarily complicated, and only 15% of the people who sign-up receive a check. The company has also been charged with operating an illegal pyramid scheme.

What is Nu Skin Enterprises?

Nu Skin Enterprises might look like a good business opportunity on the surface, but when you dig a little deeper things start to become more clear.

Nu Skun Enterprises is a multi-level marketing company that develops over 200 personal care products, ranging from facial creams to essential oils. Most of these products can be found elsewhere, for much cheaper.

But Nu Skin Enterprises offers a "financial rewards" system to encourage people to sign on as distributors.

Promoting a MLM Company is NOT a good idea.

Nu Skin uses a slightly different block-system to manage sales, where you earn bonus points depending on how many blocks you earn.

What You Should Know:

Before we dive into the block-system, there are a few things that you should know about Nu Skin enterprises.

One of the most shocking facts about this company is out of 100% of their members, only 15.42% earned a check. Keep in mind the income disclosure doesn't mention anything about profit.

Secondly, in 2014, the Chinese government accused Nu Skin enterprises of being an illegal pyramid scheme. The company paid a settlement of $47 million plus another $750,000 for bribing a Chinese official, as well as other fines.

When China accuses you of being a pyramid scheme, that's when you know things are bad.

Nu Skin has been involved in other lawsuits as well, which we'll discuss later on in this review. Immediately we can see this company has a shady history.

To "Join the team" you need to purchase at least one introductory kit. There are over 20 of these kits, most of which are over the $448 mark.

Of course you can choose to add these to your ADR cart, which automatically orders the product for you every month. I don't know about you, but I don't think paying $1,642 for some random supplements is worth it.

At least they include a tape measure.

With that in mind, lets continue to the block-system.

Nu Skin's rewards system is called Velocity, and consists of several categories: Share, Lead, and Build. The idea is to qualify for a leadership role as quickly as possible.

Blocks are way for the company to batch together different sales activity under your account. For example, your retail sales, brand affiliates, members, and representatives are all under one block. If it sounds unnecessarily complicated, that's because it is.

To qualify for a leadership role, members can participate in the block system. When you complete 12 Building Blocks in 6 months you can qualify for a Sales Leader Position.

Thanks to the Internet, I'm constantly getting at least 20 new leads per day without doing any cold calling, hard selling or recruiting.

This position will unlock weekly bonuses, with a commission rate of between 5 and 40%, as well as other bonuses. The more blocks you earn, the higher the commissions. You need to complete four blocks a month to maintain the position. Currently, there are two types of blocks: Building Blocks and Sharing Blocks. You earn one Building Block when your group earns 500 sales volume from anywhere in your group. The Sharing Blocks, on the other hand, have to come from your registered customers.

When they order something worth 500 Volume you earn one Sharing Block. You're paid for each block on a weekly basis, four times a month, and each Block can have a specific commission rate to it.

But these blocks will accumulate naturally while you go about the usual business if promoting the company and trying recruit new members.

The Nu Skin Enterprise's rewards plan is identical to other multi-level marketing companies, so we'll briefly run through it. Oddly enough, the compensation plan mentions members set their own markup for retail sales, so the company doesn't track earnings from retail profits. That sounds a little fishy too me.

And then when you qualify for an Active Distributor membership you can earn the following bonuses:

Of course, most people will be stuck with the first three methods, only about 12% of the members qualify for the other bonuses.

There are 10 membership levels too: There are maintenance requirements for each level too, such as a monthly auto-shipment of products for personal use, and a Volume requirement. Most of the active members in the the Executive level.

Is Nu Skin a Pyramid Scheme?

One could argue that all multi-level marketing companies are pyramid schemes, but as far as the law is concerned, Nu Skin is not a pyramid scheme.

They do offer products, albeit expensive ones, and they do pay members who participate in the rewards plan.

The problem is Nu Skin suffers from the same issues most multi-level marketing companies encounter.

For one, the members, in an attempt to build a team, often vastly over-estimate the potential income of the rewards plan. From taking a look at the income disclosures, it is clear the majority of people don't make any money with the program. It is not that special.

In fact you'll often end up more broke than when you started, because you have to continuously order products to maintain your rank.

Having said that, lets look at the positive side of things:

There are a few things I liked about Nu Skin, but it's still not enough to counter the whole grey-area multi-level marketing scheme.

For one, the company has been around for a long time, since 1984 and it has offices worldwide. No doubting it is an official business, with all the proper paperwork and listings, it is also on the stock market.

Secondly, there are over 200 products to promote. Granted, none of their products are particularly special, but at least there's a wide selection.

Third, commissions are paid four times a month. No need to wait for the end of the month to get paid. The block system is also an interesting way to keep track of sales information, albeit a complicated one.

Fourth, it seems like Nu Skin has learned from their lawsuits, and no longer make income promises. Most of the income-related information is toned down, and there's always a little fine-print with a link to the income disclosures. None of those, "Create the life of your dreams" promises on the website, either.

But that still doesn't make the company worth getting into...

Besides what was mentioned in the Rewards Plan section, Nu Skin Enterprises suffers from some other issues too.

One of the bigger issues is the poor customer support. It looks like their email support is down, or it takes months to receive a response. There is no clear hotline on the website either, and once you manage to find the number, there will be a rather long waiting period, sometimes more than an hour.

There are also numerous complaints from people who signed up for a sample only to be charge the full price, with no way to refund or cancel. Other complaints are about orders being placed without permission.

Another similar issue is Nu Skin offers a 14 day trial for their samples, but they don't specifically mention you'll be charged in full when the trial period expires. The full price can be quite a lot too. This issue in particular seems to be the most common on consumer review sites. Be careful.

Such as this reviewer:

The above screenshot is just one of the many Nu Skin Enterprises reviews. Notice the button below the comment? 64 people agree with that comment.

If so many people are having a negative experience with this company, maybe there is something suspicious going on?

Keep in mind the Nu Skin's entire rewards system is also designed to work against you. Don't forget only 15% of members earned a check, but all of them had to pay to sign up as members. Doesn't seem fair, does it?

Nu Skin Enterprises has had a lot of legal trouble, which we'll discuss in this section:

In 1994, the FTC required Nu Skin Enterprises to sign a statement which prohibits them from making deceptive or unrealistic claims about their products. But this is still a problem, albeit on a smaller scale.

In 2014 the Chinese government sued Nu Skin Enterprises because they suspected it was an illegal pyramid scheme.

On another note, the husband of the Nu Skin founder has been charged with six felonies, and he pleaded guilty to four of them, mostly regarding sexual abuse. He was sentenced to a year in jail.

So there's been a lot of suspicious activity going on in Nu Skin's history.

Is Nu Skin a Scam?

Though Nu Skin has been in hot water, technically it is not a scam. Most multi-level marketing companies fall into a grey-area. Nu skin's products are not bad either, but of course there are always cheaper alternatives out there.

Paying hundreds of dollars for some creams is not a good idea. Most members realize this after they sign on as distributors.

If you need help figuring out scams, read out How to Spot a Scam post.

Here's a Much Better Idea:

Nu Skin agents will convince you that you need to spend money to make money. Every business has business expenses, and you can't be afraid to spend a little.

Though that is true, what you spend your money on is what matters. Spending thousands of dollars on some creams for a chance to make some commissions is not a smart business expense.

No job on the planet requires you to buy into it first, in order to get paid.

Very few people make money with Nu Skin, and the lucky ones only make a hundred or so dollars a month. But they likely spend five times as much.

Instead of trying to find the perfect direct-selling opportunity, I recommend learning how to properly build an online business.

It's easy. If you want to learn more, take a look at the program below: